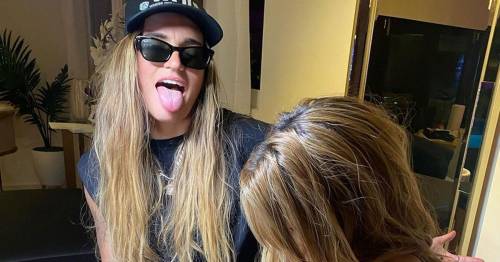 Chrishell Stause recently revealed she has moved on with a new partner – and now it seems they are bound together by ink.

Brave G Flip – who already has a number of tattoos – didn’t seem bothered that new love Chrishell was a complete novice and stuck her tongue out at the camera in a rock star pose.

The tattoo reads ‘GET ME OUTTA HERE’ in shaky handwriting – the name of G Flip’s new song.

Singer G Flip gets a tattoo from new flame Chrishell
(

The tattoo reads GET OUTTA HERE, the name of G Flip's new song
(

The quip appeared to be a reference to Chrishell’s job as a real estate agent on Netflix show Selling Sunset.

Chrishell cheekily commented underneath: “Found my new calling. Might open up a shop.”

Her Selling Sunset co-star Emma Hernan wrote: “YAS!!!!! This is hectic AF and I’m here for it!!!”

But the photo might have been a joke as G Flip also shared a video of themselves getting a tattoo in the same place by a real tattoo artist in her Instagram stories.

The video doesn’t zoom into the tattoo so it’s unclear if this is the same one – or if Chrishell pretended to do it for a prank.

Chrishell also shared a photo to her own Instagram stories which showed her with a nose piercing and covered in face tattoos – but she later told fans she just having fun with a photo filter.

Chrishell fooled fans into thinking she had face tattoos
(

Chrishell revealed she met G Flip when she starred in the music video for their new single GET ME OUTTA HERE, which is released on May 13.

Her new romance comes months after her painful split from Jason Oppenheim, who is her boss on Selling Sunset.

The pair went their separate ways after Jason decided he was not ready to have children with Chrishell, who has made no secret of her desire to become a mother.

On the Selling Sunset Reunion, Jason broke down in tears as he spoke about Chrishell, who he called the “love of his life”.

He said: “There was a lot of love between us and I still care about her very much. This has been a very difficult breakup.

“I can never think more highly of someone that I do Chrishell. She was an amazing girlfriend and she would be an amazing mum.

“It’s not that I made the wrong decision, it’s just that I had a lot of respect and still have the utmost respect for Chrishell. I loved her as much now as I did then.”

She had previously been in a relationship with co-star Jason
(

Chrishell later confirmed she was now in a relationship with singer G Flip.

“I’ve recently have been spending a lot of time with someone that’s very important to me. Their name is G Flip. They’re non-binary so they go by they/them and they are an extremely talented musician.

“It started because I was just going to be in their video. I love acting and with the job I have, I don’t always get to do it.”

Although he is still getting over their split, Jason seemed to be happy for Chrishell, telling her: “They seem like a badass and the smile that’s been on your face for the last couple of minutes makes me so happy. I’m proud of you.”