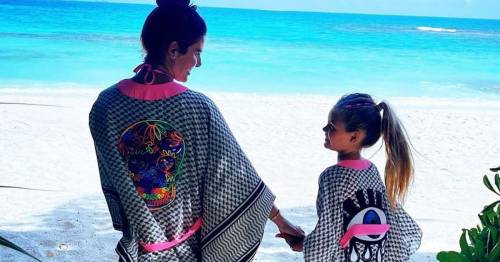 Rebekah Vardy is making the most of a family break in the sun, as she awaits the verdict of her high-profile legal battle against fellow WAG Coleen Rooney.

The mum-of-five has been treating her Instagram fans to snaps of her holiday abroad this week, as she spends some quality time with husband James Vardy and her children in an idyllic-looking setting abroad.

Dubbing her family "my island crew", Rebekah revealed to her 412,000 followers how she and her kids have been soaking up the sun and enjoying activities and "adventures" such as snorkelling and bike riding.

"Having the best adventures with my island crew [Island emoji. Love heart emoji]," the star captioned a snap of herself and one of her daughters.

Rebekah Vardy shared this scenic snap with her fans on Wednesday
(

Another sweet snap showed three of her offspring riding bikes along the beach, with the doting mum captioning the holiday memory: "Let kids be kids [love heart emoji] #summerfun."

"Fin’s little cheeky grin," one of the star's followers commented underneath the snap – noting the big smile across Rebekah's young son's face.

"Little globetrotters, looks so good," another comment reads, with a third adding: "Memories for ever! [sic]."

In addition to the three children she shares with Leicester City player Jamie, Rebekah has two children, Megan and Taylor, from previous relationships.

Rebekah has been creating special memories with her kids
(

The star has been sharing several snaps from her vacation online
(

Over on her Instagram Stories, the footballer's wife shared some snippets of a "magical" trip out on the sea – where a snorkelling venture with her kids "was a success".

Rebekah's sun soaked island trip comes after several weeks in the spotlight in the U.K, thanks to the high-profile Wagatha Christie trial.

Rebekah launched the legal battle after Coleen accused the WAG's Instagram account of leaking stories to the press about her private life back in October 2019.

Rebekah and Jamie arriving at the High Court last month
(

Rebekah denies leaking stories to the media and is suing her fellow WAG for libel, while Coleen is defending the claim on the basis her post was "substantially true".

The blockbuster court case ended on the 19th May, and the WAGs now face a wait to find out who has won the highly-publicised legal battle – with Mrs Justice Steyn saying she will rule at a later date when things wrapped up last month.

Coleen and her family enjoyed some time in Dubai
(

Coleen and Wayne missed the final day of proceedings, where both sides' lawyers made their closing arguments, to fly to Dubai with their four sons and her parents.

The mum-of-four has been sharing snaps of her own vacation over recent weeks, calling the trip "the best family holiday".

"We had the best Family holiday 2022. Dubai you were fantastic #grateful," the Liverpool-born babe captioned a collection of snap from her time in the United Arab Emirates.

Previous : Yorkshire and ‘number of individuals’ charged by ECB over Azeem Rafiq racism scandal
Next : Rwanda flight: ECHR asylum seekers decision meaning – and what happens next