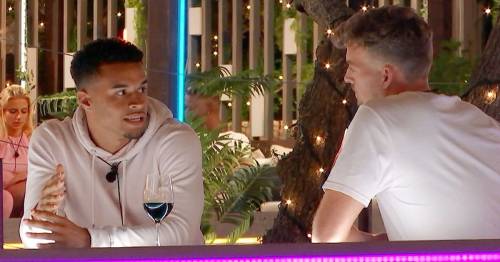 The former islanders had a tempered run-in after Toby chose new bombshell Abigail Rawlings over Chloe Burrows at a tense recoupling in the Majorcan villa.

Since the show finished, 22-year-old Toby says he's only bumped into teacher Hugo, 25, once passing by and says they're not friends.

Speaking to The Mirror, he confessed: "I’ve spoke to him just in passing comments and I think I've seen him once just passing by. It’s like we’re civil. We’re not friends, we’re not enemies, we’re civil."

And he honestly admitted that "it's just one of those" as you don’t get along with everyone in life and can't be everyone's best mate.

Toby ended up going full circle and reuniting with blonde beauty Chloe in the villa before making her his first every girlfriend.

The popular pair went on to finish as runners-up on the dating series behind their pals Liam Reardon and Millie Court.

The Islander modelling the brand's clothes

In the outside world, the bubbly couple continue to move from strength to strength too and Toby confessed they are looking at getting a property in Essex, which will also help him continue his football career with Hashtag United.

While he admits he has a much busier schedule to deal with since leaving the show, the star admits his club have been superb with him and he won't give it up as it helps to bring him back down to earth from the whirlwind of attention he is facing.

He said: "It’s tough to find time to play football and stuff because obviously you’re busy here and there, but Hashtag are always so supportive in whatever I’m doing. They’re always open to say come to training, come to games.

"I’ve literally just been finding the time because it brings you back down to earth as well because you were doing it before, so I literally went to training last night and I’ve a game on Sunday.

"Playing football, you don’t think about anything else. I love doing it."

Part of his new hectic schedule included attending the NTAs, which he said was "crazy".

"My jaw was on the floor for the whole night to be honest. Can you imagine as a normal person, you go away for a summer on a holiday, you come back with a girlfriend and you also go to the NTAs and there are celebrities everywhere.

"And some are like ‘hi, you alright?’ and you’re like ‘you know me? I’ve been watching you since i was a kid!'.

"That’s mad. It was incredible. I can’t wait to do more."

Toby is a natural

He has also landed an exciting new role as brand ambassador for boohooMAN.

Toby’s partnership with the brand will see him working on various projects including presenting, social content creation, modelling and fronting a series of collaborative campaigns.

For his first venture, the former islander will become the face of boohooMAN’s latest going-out campaign.

He described the link up as a "dream" opportunity to get involved with and an offer he had to "shake their hand off" to.

Previous : Shoppers warned of ‘tsunami’ of supermarket price rises this Christmas
Next : Woman laughs outside court after being spared jail for stabbing her sister