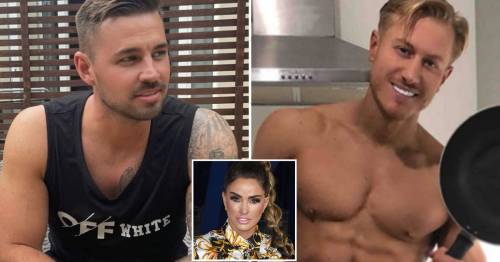 Katie Price could be offered a ringside seat if fiance Carl Woods and her former flame Kris Boyson could go head-to-head for a celebrity boxing tournament.

The un-confirmed line up could see the reality stars former and current love interest square up to each other as she's forced to watch the nail-bitting action from the sidelines.

The event earmarked to take place in the coming months has been kept under wraps but sources say The Pricey will definitely make an appearance to watch the fight.

A source exclusively told The Sun : “By coincidence Carl and Kris have both signed up to a new celebrity boxing event."

The same insider said the stars are now in training for the 'big crowd' fight at London’s O2 arena.

They added: “There is a chance that Carl and Kris could be pitched against one another – which would make for an interesting bout given their relationship with Katie.

“She is planning on having a ringside seat to watch and will be cheering on Carl.”

Katie and Kris dated on and off for two years before they ended their engagement and split in 2019.

The personal trainer later told how he was shocked to hear on the news of Kate's drink-drive car crash saying he hoped it was a 'turning point in her life'.

But the bout comes as Katie and fiance Carl are looking to make their match official and tie the knot – making it the star's fourth wedding.

She became engaged to Carl in April last year when he proposed ten months into their relationship.

She counts Peter Andre, Alex Reid and Kieran Hayler among her ex-spouses while she was engaged to Kris, Scott Sullivan, Leandro Penna, and Warren Furman.

Meanwhile she's shared a cryptic post showing a frosty sunrise out in the countryside setting to her Instagram feed.

She penned: "So excited for today..finally I'm growing a pair of balls and sorting situations out I never mentally had the straight to do before."

The only other insight offered to fans was a scholar emoji.

She also shared her glistening – pink, of course, new diary for 2022 with rose gold lettering, a sign she's determined to be looking to the future.