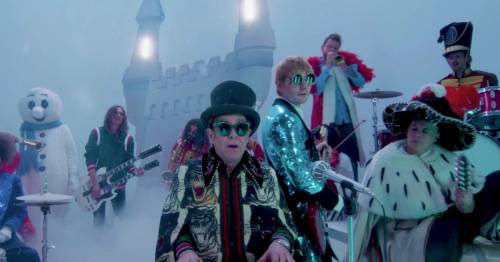 The extravagant video for single Merry Christmas features sleigh bells, uplifting arrangements and joyous festive harmonies and is the first collaboration between the pair.

There is also a nod to iconic Christmas films such as The Snowman and Love Actually.

Ed appears pays homage to the much-loved rom com as he appears in festive doorway wearing a Christmas jumper and holding up giant cue cards.

Speaking to Zane Lowe on Apple Music about the track Ed said: "When Elton rang me and said, 'Let's do a Christmas song'. I was like, there's no point doing a Christmas song, because there are so many great ones out there. If we're going to do it, we have to chuck the kitchen sink at it and it has to tick every single box. It has to be sleigh bells… It has to be ding-dong church bells, it has to be mistletoe, dancing and wine.”

"I've never actually thought of making a Christmas song. It's always been the type of thing that I thought I'd do when I was 60. It was, basically, my manager Stuart said he'd retire if I ever made a Christmas album… but to be honest, if it wasn't with Elton, I wouldn't be doing it. I've always wanted to work with him and this made the most sense…"

Ed also recalled a hair-raising incident in which he said he nearly killed Elton with a bell and promised that he will share footage of it.

He said: "On the video. There's footage of, I'm dressed up as sort of sexy Santa Claus and I kick a present, but the present had a big metal bell on top of it. I showed him the footage of it today, because we slowed it down and the bell flew past his head and would've cracked him in the head. I'll post it.

"David, Elton's partner said that you should post that. So, I will post it eventually, but it was one of these things, I had the video, I was like, "I got to show him this.” But, man, the music video is wild. We've parodied all the great British music videos that came at Christmas."

In 2017, Sheeran secured the coveted UK Christmas No.1 with his timeless ballad Perfect, whilst Elton’s 1973 classic, Step Into Christmas, has gone onto become one of the most rotated Christmas songs of all time

Profits from Merry Christmas, which is written by Ed and Elton and produced by Steve Mac will go to Sheeran’s Suffolk Music Foundation and the Elton John Aids Foundation.