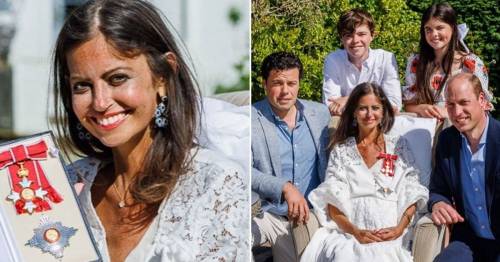 BBC presenter Deborah James admitted she could have spoken to Prince William 'all afternoon' during a 'charming' meeting after he presented her with a Damehood at her parents' home in Surrey.

Mother of two Deborah, who is receiving end of life care amid her battle with stage four bowel cancer, has raised a staggering £5.3 million for Cancer Research UK in just five days since posting a 'farewell' message on Instagram.

The Duke of Cambridge, meanwhile, is believed to have cleared his diary especially after receiving Deborah's invitation to join her for afternoon tea and champagne with her family.

Described by Deborah as 'extremely generous' with his time, the future king even took the time to offer comforting support and advice to her children Hugo, 14, and Eloise, 12. William lost his mother, Princess Diana, in 1997 when he was just 15.

Dame Deborah told The Sun: "The Duke was so charming and put all of us at ease immediately. He was incredibly engaging and generous with his time, I could have spoken to him all afternoon.

"It was an honour to have him round and he’s welcome for tea and champagne any time. I got really emotional when I was presented with my honour. It’s a memory that my family and I will treasure forever."

However, special dispensation was given by Buckingham Palace, Kensington Palace and Downing Street due to Deborah's grave circumstances, allowing her to become a Dame within a day.

Deborah went on to reveal details of her conversation with William, 39, which lasted for half an hour.

"We shared some really interesting ideas of how the BowelBabe Fund could continue to support the great work for Cancer Research UK and the Royal Marsden," she said.

"As President of The Royal Marsden he is clearly passionate about the hospital and he was deeply knowledgeable about how the BowelBabe Fund could have a meaningful impact."

Deborah made the selfless decision to receive end of life hospice care away from her own family home in South London so her children didn't have to see it full of medical equipment.

Instead she is living with parents Heather and Alistair, who William also spent time with along with Deborah's brother, Ben, and sister, Sarah.

"It means the kids can go back there and they don't have those scars everywhere. It can continue to be their home without those memories," she added.

If you would like to donate to Deborah's 'bowelbabe' fundraiser, you can do so by clicking here.