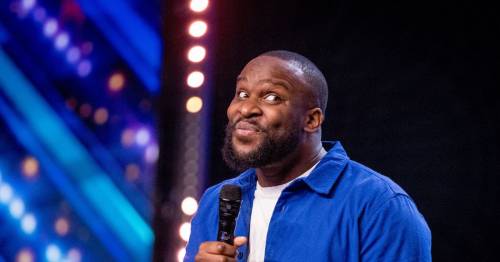 Britain's Got Talent judge Simon Cowell handed out his first Golden Buzzer over the weekend to comic Axel Blake.

The comedian appeared on Good Morning Britain on Monday to discuss keeping the Golden Buzzer decision under wraps since taping the ITV talent show's premiere episode months ago.

Sitting in the studio with Kate Garraway and Adil Ray, Axel gave ITV viewers a glimpse of how he goes about writing gags about the pandemic and his pregnant girlfriend.

At the start of the interview, Adil said: “You’ve been funny for a while now and doing a lot of funny stuff. Tell us how your career has been so far. Where have you played?”

Axel replied: “I’ve been doing it for a few years, so I’ve been doing a lot of small gigs around the UK and further places I don’t even know how to get to now.”

Adil looked impressed and slightly taken aback that the BGT star had performed at Indigo at The O2 – a 2,800 capacity entertainment venue located under the famous tented roof of the O2.

Kate then said: “Lots of things to help build up, but nothing that can take you to that big platform, which is I guess why you decided to do Britain’s Got Talent.”

Axel walked onto the stage at the London Palladium
(

Axel's jokes impressed all the judges including Alesha Dixon, Amanda Holden and David Walliams, but Simon was particularly taken by the comedian's joke about coronavirus and calling his new baby Pfizer.

As Axel walked onto the stage at the London Palladium, he revealed his day job was a property maintenance manager, as Simon joked with him about needing a new kitchen fitted at some point.

But some fans of the ITV hit were outraged by Simon’s decision to press the coveted Golden Buzzer.

One branded the decision a fix, pointing out that Axel already has a stand-up show on Amazon Prime.

Taking to Twitter, one wrote: "So last night there was a golden buzzer for a singer with net worth of 2 million and a song in one of the biggest movies to ever exist and tonight's golden buzzer was an award winning comedian who has an Amazon Prime show??? What is happening in this series?"

"Fed up of professionals getting Golden Buzzer now," said another.

Good Morning Britain airs weekdays at 6am on ITV.